So I have OpenSSH on my device which is also added to system path variable as shown below in the command prompt snippet.

I’m inside System32 folder in my command prompt (normal window | non-admin) and I opened the Explorer in the current directory by entering:

I do see OpenSSH folder, but when I try to go inside (change directory) to OpenSSH, the command prompt throws an error denoting that the path does not exist. But it does exist on the drive!

And obviously I cannot access ssh.exe which is located inside OpenSSH directory.

But interestingly, when I elevate the shell (open CMD as administrator) and try to access the OpenSSH directory or even the file ssh.exe, it worked! When I use the where command for ssh, it points to that right directory as shown below: 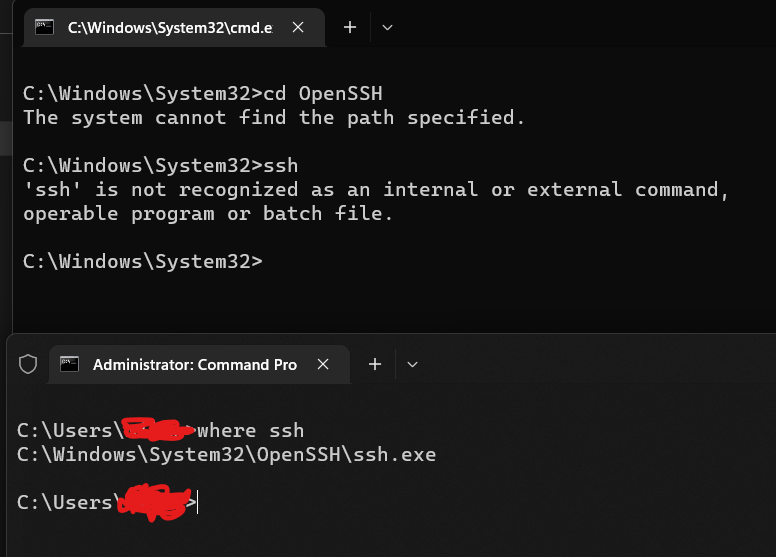 It just does not work for cmd in normal window but works when cmd is opened as administrator.

When a 32-bit application on 64-bit Windows starts cmd.exe either with %SystemRoot%\System32\cmd.exe or with %ComSpec% or with cmd.exe or in worst case with just cmd, there is started the 32-bit version of the Windows Command Processor in directory %SystemRoot%\SysWOW64 because of the file system redirector.

In a Windows batch file can be used the following code:

This batch file can be used on Windows XP and all newer Windows versions whereby on the older Windows versions is most likely output just the error message that the executable ssh.exe could not be found because of not being installed by default.