We have a number of components in our Angular application that need to regularly display new values every second that are unique to each component (countdowns, timestamps, elapsed time, etc). The most natural way to is to create observables that use the RxJS timer and interval factory functions. However, these trigger Angular change detection at every interval for the entire app as many times as the interval function was called. If we have dozens of components on the page, this triggers change detection for the entire app dozens of times every second or time period, creating a large performance overhead.

So far there are two ways I’ve attempted to solve the problem. A good answer to either would be very helpful – ideally both. I want to avoid manual trigger of change detection and instead rely on new values emitted from Observables and have the async pipe/OnPush change detection strategy be responsible for triggering change detection. If this isn’t possible, I’d like to understand why.

It’s because observables are cold and the value producer (setInterval) is only executed when a subscription happens. Read more here. Although this code is executed outside of Angular zone:

it doesn’t actually immediately invoke the value producer inside interval operator. It will be later invoked when AsyncPipe in the IntervalInnerComponent subscribes. And this happens in inside Angular zone: 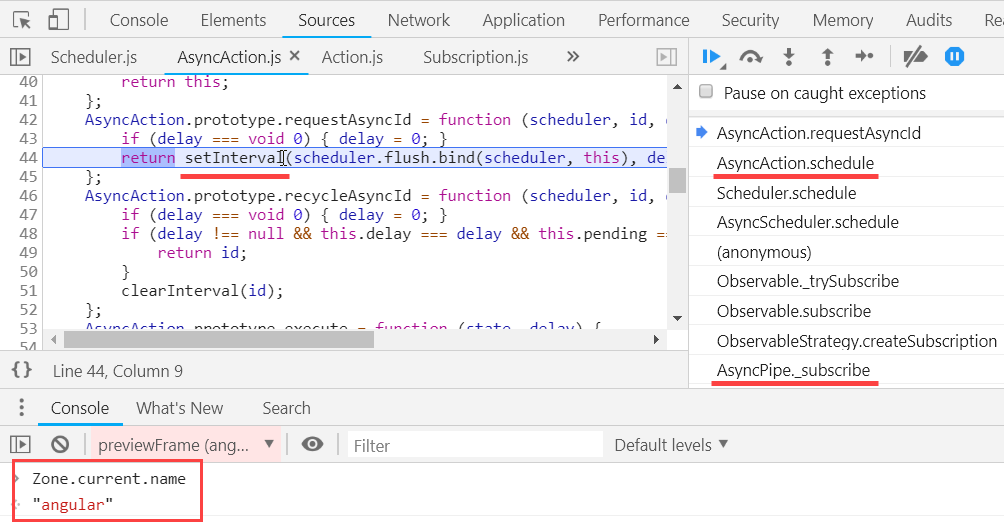 Using subject in the next alternative you make it hot and subscribe immediately outside of Angular zone.